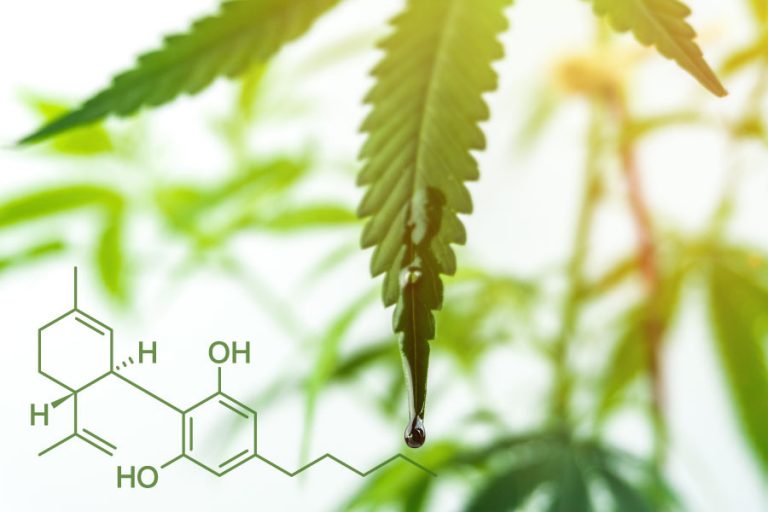 BEST OF HEMP AT YOUR FINGERTIPS.
SHOP NOW →
CBD - one of nature's most beneficial compounds. Here is what we know about it.
TABLE OF CONTENTS

But then we ask ourselves, why exactly is CBD so popular? And above all, what is CBD? You’ll find answers to these questions and many more in the article below.

Cannabidiol or CBD is only one of more than 140 cannabinoids discovered and identified in the cannabis plant (Cannabis Sativa L.). CBD is the most abundant cannabinoid in hemp plants and it can be found in flowers and trichomes of every cannabis strain.

How much CBD can hemp and cannabis have?

As we already said, CBD is the most abundant cannabinoid in hemp plant – from 0,5 to 3% of CBD can be found in (industrial) hemp plants. Whilst CBD is gaining on popularity, new strains are being developed, containing CBD to up to 25%, while simultaneously keeping THC below the legal limit of 0,2% (or 0,3% – depending on where you’re from).

High THC strains usually contain a very small amount of CBD, but again, new strains are being developed, enabling us to plant seeds that are said to produce up to 20% of both, CBD and THC.

Are this kind of CBD products safe?

CBD products containing less than the legal limit of THC are safe in general. There are no worries about being “high”, paranoid, anxious or any other symptoms that are the consequence of high THC products. Even though the amount of THC is so low that it can’t cause high, it is more than welcome to be present in CBD products. Why, you ask? CBD and other cannabinoids give us the widest range of beneficial effects when consumed together – this is what we call entourage effect (which only one cannabinoid can’t achieve).

CBD and THC – what’s the fuss about?

THC is considered to be a “notorious” cannabinoid because its psychoactive effects are the main cause that cannabis use is despised and in many cases even prohibited.

Thankfully misconceptions and prejudices are slowly fading away, but the law still prohibits that THC levels are higher than 0,2% (or 0,3%).

CBD, on the other hand, is completely non-psychoactive and legal compound, that instead of central, has a major effect on the peripheral nervous system and immune system and does not cause the high. In general, we can say that CBD helps with balancing our endocannabinoid system which has a great impact on numerous brain functions (pain perception, movement, emotions, sleep, etc.).

How is CBD produced?

As we already mentioned, CBD is most abundant in flowers of almost every cannabis strains. For millennia CBD and other cannabinoids were obtained by soaking cannabis in oils (hemp macerate), making teas, as well as by smoking – only then they didn’t know what CBD was or what cannabinoids were.

Nowadays, same methods for obtaining CBD are still in use, but technology and knowledge advanced from those times, leading to discoveries of new, more efficient methods of extraction.

The most efficient and the least “dangerous” method is supercritical CO2 extraction. With this method, the obtained extract is completely solvent-free and does not contain any harmful impurities, since the CO2 evaporates back into the container for reuse after the extraction.

A bit less efficient and a bit more dangerous extraction method is with use of alcohol (ethanol). It is said to be “dangerous” because, with improper handling, it may even cause an explosion, with the improper extraction process, alcohol can still be present in the final product. This type of method was mostly used for DIY extracts, but with the progression and development of technology, more and more companies are making large-scale extractions with this type of extraction.

Bhuthane CBD extraction is also quite common for DIY extracts. As the name itself says, this method uses gas (butane). Although it is the fastest extraction method, it is also the least efficient and the least “pure” method.

Not long ago, CBD (and other cannabinoids) in food and food supplements were categorized as a “Novel Food”. This categorization strictly prohibits the use of cannabinoids and CBD in such products. “Novel food” is defined as a food that has no evidence of use throughout the history or it is produced with methods unknown prior 1995.

We also mentioned hemp macerate, which is obtained by soaking hemp flowers and leaves into the oil. With the development of technology and modern extraction methods, such method (soaking hemp into oil) is no longer needed, as they are much more efficient – the final product is almost the same, with the difference of cannabinoid content. This extract is then usually diluted in a carrier oil – this way, very similar product to hemp macerate is obtained.

Recently there is some “fresh news” about prohibiting the use of CBD (cannabidiol) and other cannabinoids not only in Novel foods but also in cosmetics in the area of EU. They (people with “power” and probably pharmacies) want to prohibit the use of phytocannabinoids (plant-derived cannabinoids) in cosmetics and substitute them with synthetic ones.

The main reason for the prohibition is said to be the Drug convention that was signed in New York on the 30th of March in 1961. In this convention, the use of hemp/cannabis flowers for the production of extracts was prohibited. Little do they know, as this mostly implied to the psychoactive properties of THC in cannabis and not because of CBD. An interesting thing or should I say fact is that in 1961 the molecular structure of CBD (cannabidiol) wasn’t discovered yet. This changed in 1963, which lead to rapid progression of researches and studies about CBD and its effects. In the last decade, those numbers significantly increased, mostly due to CBD gaining on popularity and fewer misconceptions and prejudices about hemp and cannabis. We’ll talk about researches and studies a bit later in the article.

CBD – what do the laws say?

With the new law, they want to prohibit the use of CBD and other phytocannabinoids in cosmetics and (what they already prohibited) food supplements, replacing natural cannabinoids with synthetic ones. But here is the thing that those people don’t know (or they are just closing their eyes shut and keeping interest only in money) is that synthetic cannabinoids caused numerous deaths until today – for example, no (direct) deaths caused by CBD or other natural cannabinoids have been recorded throughout human history. Here you can check the legal status of CBD, hemp and medical cannabis around the world.

Interest in the therapeutic potential of CBD is rapidly increasing among scientists, doctors and users. This is mostly due to numerous scientifically proven effects of CBD on our bodies (endocannabinoid system) and the rapid growth of a wide variety of CBD products.

With every research completed, more and more evidence about easing numerous symptoms, illnesses and diseases are gathered. Because of its amazing therapeutic potential, CBD was (and still is) the subject of researches about epilepsy & seizures, schizophrenia, depression, anxiety, ADHD, psychic instability, diabetes, neurological disorders, cancer, nausea, inflammations and the list goes on.

Despite its widespread use, CBD (cannabidiol) has no side effects and is not harmful to our health. Besides that, it has been scientifically proven that CBD can neutralize the intoxicating effects of THC, such as forgetfulness and anxiety. Both CBD and THC are the most abundant and the most researched cannabinoids in cannabis/hemp.

Hemp CBD paste (and/or wax, resin, shatter,..) that is rich in CBD can be used on its own, as the main ingredient of CBD oil (CBD drops), CBD balms (CBD salve) and other cosmetics. The most common CBD products are CBD drops/CBD oil, where the extract is mixed in a carrier oil (hemp seed oil, olive oil, MCT oil,…). CBD cosmetics are also gaining popularity, due to beneficial properties of CBD. Cosmetics usually contain different kinds of waxes and oils, which only widens the spectre of benefits. CBD cosmetics with low CBD content are usually used for easing and preventing skin problems, whilst cosmetics and products with high CBD content are usually used for pain relief, inflammations, to strengthen the immune system, soothe muscle spasms and also have good antioxidant properties.

When we ingest (consume) CBD or any other cannabinoid, it “travels” to the liver, where it can interact with numerous medications/drugs by suppressing the activity of Cytochromes P450 (a family of liver enzymes that detoxify chemical substances in medicines with help of oxygen. This can lead to toxic effects of medicines, reduced pharmacological effect and undesirable and unpredictable effect of the drug/medicine. It was found out that the same dose of chemotherapy or antiepileptic drugs leads to an increase in the plasma concentration of the metabolites of these drugs. If CBD is consumed simultaneously, it is essential to reduce the dose of the medication to prevent undesirable side effects. Otherwise, small doses such as those in dietary supplements should not affect the function of these enzymes. Nevertheless, it is always advisable to consult with a physician before using CBD in combination with other medications.

Treating any diseases or illnesses requires individual treatment as the effect may be different for each individual. Doctors who prescribe products with natural cannabinoids to their patients advocate preparations with a higher CBD content and a low THC content, as well as vice versa. The starting dose is recommended to be taken before bedtime and then taken at regular intervals of six hours or four times a day (of course, the number of daily doses is also dependent on what you want to “treat”). The frequency of CBD intake is dependent on the half-life of cannabinoids in the body, which is somewhere between 6 to 8 hours. The duration of treatment is individually adjusted. Positive effects in the treatment of various diseases can only be expected with preparations with known contents of certain important cannabinoids, such as CBD and THC and various terpenes. Only with such preparations you can treat various diseases and adjust the dose according to the course of the disease. Knowledge and experience combined with a wide variety of cannabinoids can have an extremely positive effect in the treatment of various conditions.

CBD (cannabidiol) is a molecule with outstanding properties and great therapeutic potential. The pharmacy has also recognized this and made a synthetic verison of CBD that is permitted and available on prescription in numerous countries. Synthetic CBD, however, is by no means comparable to derived CBD extract. In addition to CBD, the natural extract contains a whole spectrum of cannabinoids, terpenes, flavonoids and other biologically active molecules. These molecules increase the affinity of CBD binding to the CB2 receptor, and some of the terpenes also activate CB2 receptors by themselves. It is a synergistic “operation” and thus the natural form of cannabinoids (CBD, THC, THCV, CBDA, etc.) works more efficiently and on a wider spectrum. However, considering the role of the endocannabinoid system in our bodies, it is obvious that the multifaceted action of the natural form, also considering the price aspect, is a great advantage.