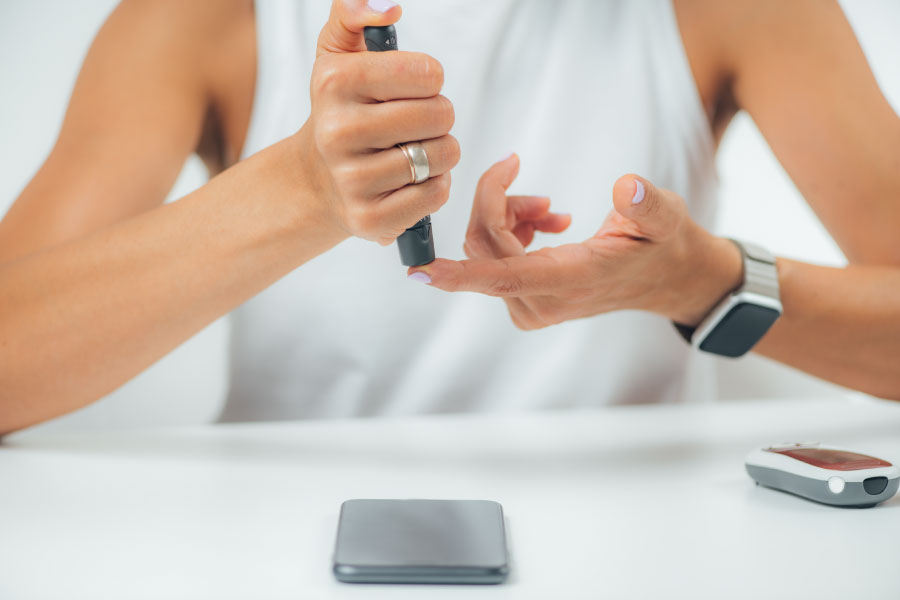 CBD and Diabetes: How to help prevent and treat

Diabetes is one of the most prevalent disorders in the world. Over 35% of adults have diabetes in some areas of the world, and we see more and more children affected by diabetes every year. By increasing the sugar in our diets and reducing the amount of exercise most of us get, diabetes is quickly becoming a plague to the modern world. Can CBD help us find our way through?

Diabetes is a group of metabolic disorders characterized by high blood sugar levels over a long period of time, which is also called chronic hyperglycemia. Diabetes results from defects in the way the body either produces or responds to insulin.

Insulin is one of the key hormones in regulating the body’s digestion system. If our insulin levels become imbalanced, our bodies have trouble metabolizing carbohydrates, fats, and proteins, as well as absorbing glucose from the bloodstream for energy.

The American Diabetes Association came up with a classification of diabetes in 1997, separating it into three broad categories: type 1, type 2, and gestational diabetes.
Type 1 diabetes tends to affect people from a young age. In fact, it used to be called ‘juvenile diabetes.’ In type 1 diabetes, the body’s immune system attacks its own insulin-producing cells located in the pancreas. People with type 1 diabetes often manage their diabetes with insulin injections.

Type 2 diabetes is by far the more common type of diabetes. It occurs when someone’s body doesn’t produce enough insulin, or where a person’s cells do not respond properly to insulin. Type 2 diabetes is sometimes referred to as late-onset or adult-onset diabetes, and it’s most often caused by insufficient exercise and excess body weight.

Gestational diabetes affects some pregnant women as their bodies’ hormones and hormone receptors react to the pregnancy, resulting in a raised blood sugar level. However, gestational diabetes usually disappears after the baby is born.

People have used the cannabis plant for millennia to benefit from its many therapeutic characteristics, from pain relief during childbirth to lowering anxiety and improving heart health.

CBD, short for cannabidiol, is one of the active ingredients in the Cannabis sativa plant. Although it’s neither psychoactive nor psychotropic (meaning it doesn’t get you ‘high’), cannabidiol does affect the body in numerous ways.

In the last ten years or so, CBD oil has become a major industry. Essentially, CBD oil is cannabidiol extract from the cannabis plant mixed with a carrier oil (at Hempika, we use cold-pressed hemp seed oil). There has also been an explosion in scientific research into the many benefits of CBD, including how CBD affects people with diabetes.

How does CBD help with diabetes?

Some of the most extensive scientific studies in the last few years have been trying to understand the relationship between cannabidiol and diabetes. The effects of CBD on type 1 and type 2 diabetes are being studied extensively at universities and hospitals around the world, and the results are starting to look promising.

Reducing the risk of type 2 diabetes

We still don’t have that much science to show the relationship between CBD and type 2 diabetes in humans. However, one of the most extensive studies on the effects of cannabis on the human body was related to type 2 diabetes. Over the course of ten years, researchers in Sweden analyzed data from almost 18,000 test subjects to determine whether cannabis reduces the risk of type 2 diabetes.

While the study ultimately drew no conclusive evidence, there were definitely positive signs. The scientists are quick to point out that more detailed studies are needed, particularly into CBD’s potential for reducing the risk of type 2 diabetes.

Another study from 2006 found that CBD treatment significantly reduces the incidence of diabetes in non-obese mice. In the study, the results indicate that CBD’s way of interacting with the body’s immune response helps decrease the risk of diabetes, particularly the way it inhibits and delays insulitis, a disease of the pancreas caused by infiltrating lymphocytes.

Oxidative stress and inflammation play key roles in developing type 2 diabetes and exacerbating its complications and symptoms. Because the body’s endocannabinoid system (ECS) significantly influences oxygen species production and inflammation, scientists and researchers have been actively looking into CBD as a potential treatment for type 2 diabetes.

When someone has type 1 diabetes, many of their insulin-producing beta cells are destroyed in the pancreas by invading immune cells called leukocytes. This invasion often causes pancreatic inflammation, one of the negative symptoms of type 1 diabetes.

While we would like to see more research into the relationship between CBD and type 1 diabetes in humans, the initial results are promising. Furthermore, CBD’s anti-inflammatory properties are known to be effective in the human body, so we have plenty to be hopeful for when it comes to lowering pancreatic inflammation caused by type 1 diabetes.

People with type 2 diabetes are at much higher risk of developing dementia, and studies have linked long term diabetes with cognitive decline. In one study with middle-aged diabetic rats, scientists studied the effects of CBD on the brain inflammation and neuroplasticity of the animals.

After thirty days, the rats who had been treated with CBD showed improved memory performance and reduced hippocampal inflammation. On the other hand, the animals who hadn’t been given CBD exhibited cognitive deficits exacerbated by their diabetes.

While these results came from studies done on animals, there is a growing body of evidence that CBD helps decrease cognitive decline, and there’s plenty to be hopeful for when it comes to using CBD to help lower inflammation and increase neuroplasticity for those people living with diabetes.

How to take CBD for diabetes?

Cannabidiol (CBD) can be taken in many various ways. Today, you’ll find CBD oils, tinctures, edibles, pills, capsules, creams, soaps, and more. Because diabetes has to do with the pancreas and blood sugar levels, most of the studies include ingesting the CBD, either using a tincture or through edibles or supplements.

Like any new supplement or regime, we recommend starting low and slow with your CBD dose for diabetes. A 10mg dose is a good place to start. Then, while monitoring the effects, you can increase your intake slowly over a period of time, usually in a matter of weeks. High doses don’t necessarily mean more effective as everybody’s bodies are different.

Pros and cons of CBD for diabetes

Some people, however, reported side effects, including tiredness and fatigue, diarrhoea, and changes in appetite and weight. Importantly, CBD has far fewer side effects than many other drugs, and its side effect profile is one of its strongest benefits.

From reducing pancreatic inflammation to improving cognitive function to lowering oxidative stress, CBD shows a potential treasure trove of benefits for people living with diabetes. Whether it’s helping regulate sugar intake in an attempt to prevent diabetes or alleviating the symptoms of type 1 diabetes, CBD has the potential to help ease the burden caused by one of the most prevalent health conditions in the world.

PrevHere is Why You Should Try CBD Oil for Psoriasis
CBD for Arthritis: Everything You Need To KnowNext