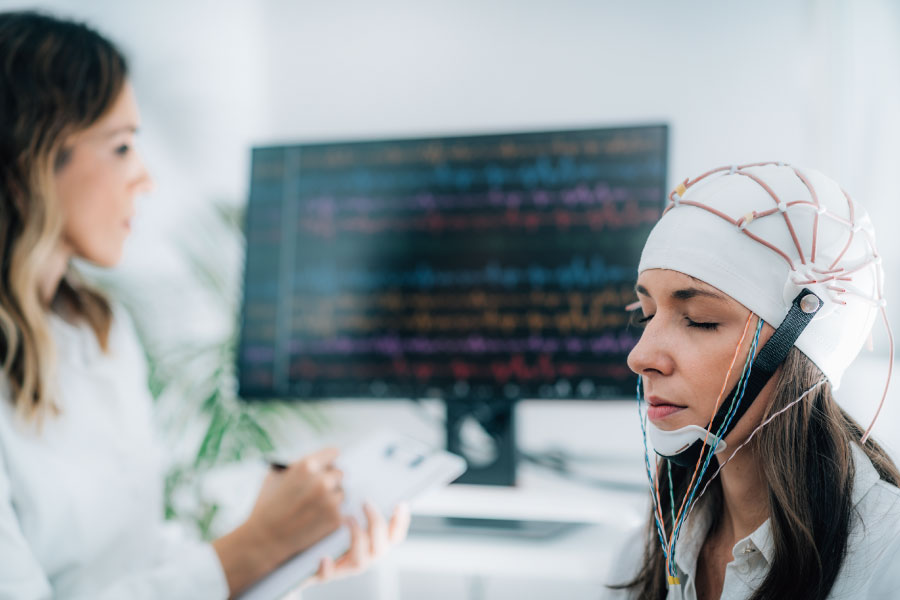 Epilepsy can be one of the most challenging conditions to live with for children and adults. Because there are many different forms of epilepsy, it can be a particularly difficult condition to treat. People who have epilepsy can go through numerous prescriptions, procedures, and surgeries in an attempt to reduce their seizures, and still, many find no relief.

Those hit particularly hard are children diagnosed with epilepsy. Epilepsy tends to show itself in people either when they are children or over 60. Two syndromes, Lennox-Gastaut syndrome and Dravet syndrome, are two forms of epilepsy particularly prevalent in children. Both syndromes are proving hard to treat with traditional pharmaceutical drugs and procedures.

For decades now, researchers and scientists have been studying the effects of CBD on seizures. A whole area of research has been quietly developing in the background until, after a few momentous changes in regulations and laws worldwide, CBD oil for epilepsy hit the mainstream.

First, there were the incredible case studies, like Charlotte Figi and Charlotte’s Web, which we’ll cover in further detail. Then came the clinical trials, tests, and research papers. And, in 2018, the first-ever cannabis-based drug was regulated by the FDA after clinical trials were successful in proving CBD’s effectiveness at reducing seizures.

In this article, we’ll go into the science and biology of what seizures are, and how and why CBD affects them. We’ll compare the differences between conventional pharmaceutical drugs often used to treat epilepsy and CBD, and we’ll take a look at some of the most famous stories and clinical trials on CBD’s effects on epilepsy.

You’ll also find plenty of useful information, from correct dosage to side effects, to treating your pet’s seizures with CBD. By the end, you should all the information you need about treating epilepsy with CBD oil versus conventional medicine.

Epilepsy is a condition that affects people by disrupting electrical activity in the brain. Epilepsy can cause frequent seizures. Epilepsy often starts in childhood or people over the age of 60. Some people grow out of epilepsy while it remains with others for their whole lives.

There are more than ten types of epilepsy, depending on what type of seizures the person experiences. Because epilepsy affects people’s brains, it can have a wide range of symptoms, including confusion, staring, uncontrollable jerking and shaking of the arms and legs, loss of awareness, and loss of consciousness.

The common causes of epilepsy change somewhat depending on the age of the person. For newborns, brain malfunctions can cause epilepsy, as can a lack of oxygen during birth or low levels of blood sugar, calcium, or magnesium. Maternal drug use has also been linked to seizures and epilepsy.

For children, genetic factors, congenital conditions such as Down’s syndrome, tuberous sclerosis, and neurofibromatosis, and head trauma can cause seizures and epilepsy. Around 30% of children with autism spectrum disorder may also suffer from seizures. Scar tissue in the brain after infections is also a known cause of epilepsy in children and young adults.

In seniors, epilepsy is most often caused by the brain being damaged as a result of a stroke or head trauma. Alzheimer’s disease and brain tumors have also been shown to cause epilepsy and seizures.

Seizures are sudden bursts of electrical activity in the brain. This disturbance can change someone’s behavior, movements, and feelings, as well as state of consciousness. While psychological factors cause some seizures, if someone has numerous, recurrent seizures, it’s often a sign that they have epilepsy.

There are a few different types of epileptic seizures, depending on the symptoms exhibited by the person having the seizure. The main group of seizures we’re going to talk about is called refractory seizures.

The area where CBD for epilepsy has shown the most promise is in treating people with refractory seizures. There has also been a lot of progress using CBD-based treatment to help manage seizures associated with Lennox-Gastaut syndrome and Dravet syndrome, two particularly challenging epilepsy syndromes, neither of which are easily treatable with traditional drugs or procedures.

For years, people have been treating epilepsy or trying to treat it, with medications designed and made by pharmaceutical companies. These medications are called antiepileptic drugs (AEDs). Lamictal is a common drug for partial epilepsy. Valproic acid is common for generalized epilepsy.

Other common AEDs that are regularly prescribed for people who have epilepsy include sodium valproate, carbamazepine, lamotrigine, and levetiracetam. Clinical studies show that AEDs don’t cure epilepsy, but some help reduce and even stop the number and frequency of seizures.

For some people, however, AEDs have no effect. When this happens, it’s not uncommon for people to be prescribed a combination of two or more AEDs at once, with a procedure or two on top, as doctors are left to pretty much guess what might work.

If AEDs don’t help the person, other treatments for epilepsy include implanting devices under the skin that send electrical impulses to the brain (called vagus nerve stimulation), as well as specific diets like the ketogenic diet, and more intrusive procedures like brain surgery.

The ketogenic diet has gained popularity in the last few years for treating some people who have epilepsy, particularly children, and especially children with refractory seizures (seizures that don’t respond to meds). The ketogenic diet is a high-fat, low-carb diet and is carefully monitored by a dietitian when used to treat people with seizures.

One of the main problems of AEDs and conventional treatments for epilepsy and seizures is the side effects. Many antiepileptic medications come with challenging side effects, which can include dizziness, nausea, irritability, vomiting, and rash. Other common side effects of AEDs can be changes in emotions, behavior, and memory.

When someone has refractory seizures, as doctors prescribe them more and more meds, or if they’re subjected to a more extreme form of treatment like brain surgery or an implanted device, side effects may be more prevalent and difficult to live with.

Using cannabis, and more specifically, the CBD compound of the plant, first gained fame as a treatment for epilepsy and seizures back in 2011, when Charlotte Figi became “the girl who changed the medical marijuana laws” forever.

Born in 2006, Charlotte Figi suffered from Dravet syndrome from a very early age, experiencing numerous catastrophic seizures a day. After her first doses of Charlotte’s Web, a strain of cannabis particularly high in CBD, she experienced an immediate reduction in her epileptic seizures.

Her story became famous in the press and became the catalyst for much of the research into treating epilepsy with cannabis. In the last few years, CBD-based treatments have been the focus of numerous scientific research papers as doctors try to find a cure for refractory seizures.

Many people are turning to CBD treatments for epilepsy not only because of their effectiveness but because of the fact that it’s a natural alternative to pharmaceutical meds without many of the potentially challenging side effects.

The medical community is quickly becoming switched onto CBD and its benefits for patients who have epilepsy. Here in Slovenia, for example, pediatricians are prescribing our CBD products to children with epilepsy if conventional medications aren’t working.

CBD products offer immediate relief for many people suffering from epileptic seizures. Studies have shown the effectiveness of treating animals and humans with CBD, both full-spectrum CBD and isolate CBD.

In 2018, Epidiolex became the first-ever CBD product to be approved by the United States Food and Drug Administration (FDA). This landmark decision was one of the key moments in increasing people’s awareness of the benefits of using CBD to treat epilepsy.

The FDA approved Epidiolex for the treatment of Lennox-Gastaut syndrome and Dravet syndrome in patients two years old and above. This made CBD the first drug ever to be approved by the FDA to help treat patients with Dravet syndrome.

The efficacy of Epiliodex to treat epilepsy was tested by GW Research Ltd. back in 2014 when over 500 patients took part in three randomized, double-blind, placebo-controlled clinical trials. The test subjects all suffered from either Lennox-Gastaut syndrome or Dravet syndrome. The results of the tests clearly showed that patients taking the CBD-based Epidiolex, along with other medications, had fewer seizures than those just taking the placebo.

Since the high-profile success of the Epidiolex clinical trials, many doctors around the world are quickly becoming aware of the true potential of CBD to treat epilepsy. Here at Hempika, we work closely with Dr. Neubauer, a well-known pediatrician in Slovenia who specializes in treating children with epilepsy.

When it comes to choosing your strength of CBD oil for treating epilepsy, there are a few things to keep in mind. First and foremost, as with any CBD product, you want to start low and increase the dosage over a period of time. Higher doses don’t automatically mean better effects as everybody’s bodies and nervous systems are different.

For best results, start your CBD dose around 1.5 to 2.5 mg of CBD per kilogram of bodyweight. For example, if you weigh 60 kg, you would want to start with a 90 mg of CBD. Once you’ve tried it, you can increase the dose to see what works best for you. It’s best to take 2-4 doses per day to be effective.

CBD for epilepsy in animals

The benefits of CBD oil for epilepsy in animals is an area of research that’s backing up what we’re seeing in people. Along with clinical trials involving rats, there have been some studies to show CBD’s effectiveness at reducing seizures in dogs. And CBD for canine seizures is quickly becoming a viable treatment.

All vertebrates have endocannabinoid systems, which means they can benefit from taking CBD. One clinical trial found that nearly 90% of dogs who received CBD showed a reduction in the frequency of their seizures. Vets around the world are tuning into the game-changing possibilities of CBD treatment for animal seizures.

If you or someone you know suffers from epilepsy, talk to your health care professional about introducing CBD into the treatment plan. CBD’s wide-ranging health benefits are good for your mind, body, and brain.

The latest science is showing us that CBD is proving to be an effective treatment for many people’s epilepsy. It’s fast-acting and effective on numerous types of epilepsy, particularly on forms of epilepsy that traditional drugs don’t work on like Lennox-Gastaut syndrome or Dravet syndrome in children.

Epilepsy can affect the person suffering from it and the people around them in profound ways. If we can help alleviate some of the stress or symptoms caused by the condition, then we feel like we’re doing our work.

Please get in touch if you have more questions about treating epilepsy with CBD.